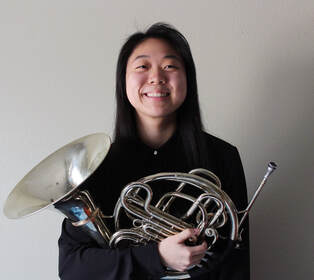 Rachel Kim       rachelmiakim@gmail.com
Born and raised in Southern California, Rachel is an active freelance musician in the Los Angeles area. After discovering an affinity for music and the arts at an early age, Rachel set out to spread her love for music to others while simultaneously improving her craft. Over the years, Rachel consistently placed in the top ensembles at the All Southern and All State Honor Groups, participated in numerous summer festivals, and was Principal Horn of various youth ensembles. She has also had the opportunity to perform in world class venues such as Carnegie Hall, Walt Disney Concert Hall, and the John F. Kennedy Center for the Performing Arts.

Rachel is currently finishing up her Bachelor of Music in Horn Performance at the University of Southern California Thornton School of Music, where she studies with Steve Becknell and Julie Landsman. Past teachers include Kristy Morrell, Katie Faraudo, and Laura Brenes. As a graduate of South Pointe MS in 2014 and Diamond Bar HS in 2018, Rachel is excited to return and inspire the next generation of musicians.