This is an intense 3 days of full percussion submersion!!

-Age group includes 9-15 year olds.
-Instruments will be provided.
-If you have your own sticks and mallets, bring them.
-Bring a 3 ringed-binder and pencil.

Housing for students traveling from afar:
If you live outside of the area and need a place to stay while you attend the camp, email Ms. Willmering, swillmering@wvusd.k12.ca.us
She will set you up with a South Pointe percussion student's family where you can stay.

Read about the staff: 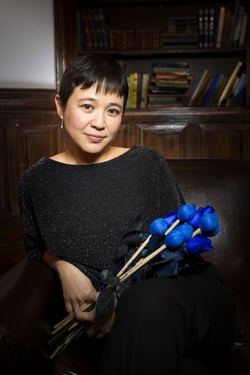 Ms. Wu is Associate Professor of Music and the director of the percussion program at Northwestern University.   She had been on faculty at Manhattan School of Music, Rutgers University and West Virginia University.  Ms. Wu is a endorser of Majestic, Mapex, Zildjian, Innovative Percussion and Evans. 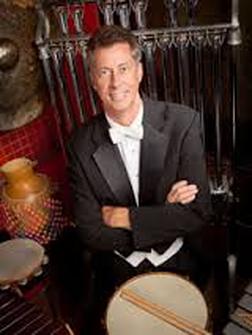 A faculty member of the Manhattan School of Music since 1989, Christopher Lamb has led clinics and master classes throughout the United States and on almost every continent. In 1999 he was the recipient of a Fulbright Scholars Award to lecture and conduct research in Australia. During his five-month residency at the Victorian College of the Arts in Melbourne, he presented master classes and seminars titled “A Comprehensive Examination of Orchestral Percussion,” which has grown into a model for the art of teaching percussion. In 2010 Mr. Lamb was invited to join the faculty of the Royal Conservatoire of Scotland as an international fellow.
Mr. Lamb has recorded chamber works on the New World, Cala, and CRI labels, and his Grammy Award–winning performance of Schwantner’s Percussion Concerto is available on the Naxos label. Christopher Lamb is a former member of The Metropolitan Opera Orchestra and Buffalo Philharmonic and a graduate of the Eastman School of Music. 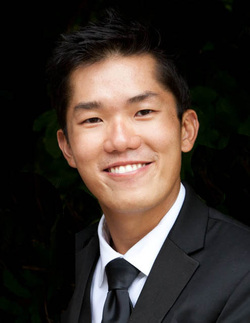 Born and raised in Houston, Texas, HUEI-YUAN PAN attended The University of Texas at Austin, graduating with a Bachelor of Music degree in Music Education, and continued his studies at Northwestern University, receiving a Masters of Music degree in Percussion Performance and Literature.   He then served on the music faculty at Lyons Township HS in La Grange, IL beginning in 2007, teaching courses ranging from Concert Band, Jazz Band, AP Music Theory, to Beginning Folk Guitar, and was awarded tenure in 2011.

In 2012, Mr. Pan moved to Los Angeles, and is currently pursuing doctoral studies in Music Education at the USC Thornton School of Music.  Current projects include a collaborative research effort exploring the effects of music training on cognitive development at the USC Brain and Creativity institute, as well as serving as a Graduate Teaching Assistant for the USC Music Industry and Technology program.  Mr. Pan was appointed as faculty at The Colburn School in Fall 2013 and serves as the Director of the Colburn Young Musicians Program. He is also currently the Percussion Caption Head of the Phantom Regiment Drum and Bugle Corps.  It is with great passion that he strives to promote music through education, research and performance. 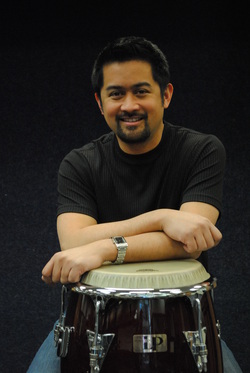 ERIC SAMSON is a versatile percussionist who is comfortable playing a wide variety of percussion instruments to fit any musical need.  Whether it is playing timpani in an orchestra, drum set in a jazz trio, or his specialty, Afro-latin percussion in any situation and everything in between, he has done it all.

Eric began his music studies at Riverside Community College where he began studying concert percussion with Steven Schmidt and was a member of the RCC Marching Tigers Marching Band and Winter Drum Line.  After transferring to CSU, Fullerton, he obtained his B.A. in Instrumental Music Education and California Teaching Credential and is completing his M.M. in Afro-Latin Music at CSU, Los Angeles.  As a student of percussion, he has studied concert percussion with Todd Miller and Judy Chilnick, Afro-latin percussion with Robert Fernandez and Luis Conte, and drum set with Steve Houghton and Raul Pineda.  In 2003, Eric was a participant of the Henry Mancini Institute and performed with the HMI Orchestra until operations ceased in 2006.  While performing with HMI, he had the opportunity to share the stage with artists such as Quincy Jones, Tony Bennett, Diane Reeves, Stevie Wonder, Michael Buble, Vinnie Colaiuta, Arturo Sandoval, Alex Acuna, Peter Erskine and Bill Cunliffe. In 2009, Eric appeared on “The Jay Leno Show” where he played percussion for singer Andrea Bocelli and The Muppets.  He is currently the percussionist for Southern California artist Tini Grey, leads and plays drums for his jazz quartet, Indigenous Soul, and continues to be in demand as a freelance percussionist.

Eric is currently the Director of Instrumental Music at El Dorado High School in Placentia, CA where he teaches Marching Band, Wind Ensemble, Jazz Band and Percussion Ensemble.  He is currently a member of the Southern California Scholastic Band and Orchestra Association and California Band Directors Association and is endorsed by Remo Drum Heads, Innovative Percussion and Gruv Gear.