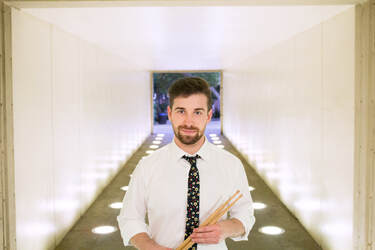 Born and raised in Southern California in a family with an affinity for the arts, Jonathan grew to love music at a young age. He began to take piano lessons in his early elementary school years, learning the fundamentals of music while coupling his natural abilities with a discipline for the craft. Jonathan excelled as a student and expanded his musical interests to include orchestral, jazz, and popular music. Jonathan has had the opportunity to be involved in the Idyllwild Summer Arts program, Claremont’s Young Musicians Orchestra, All-Southern Jazz Ensembles and Orchestra, performing at such venues as The Walt Disney Concert Hall in Los Angeles, The Hollywood Bowl, Royce Hall, Toyota Arena, and The Motzartium in (Austria). As an aspiring professional musician, Jonathan chose to further his musical education at Azusa Pacific University's College of Music and the Arts as a Percussion Performance major, studying both classical and commercial percussion and drum set. After getting his Bachelor of Music degree in Percussion Performance, Jonathan continued his education by attending graduate school at University of California, Los Angeles (UCLA) where he graduated with a Masters of Music with an emphasis in Percussion Performance.
Since graduating from UCLA, Jonathan has played with groups such as the Marina Del Ray Symphony, Desert Symphony, Eastern Sierra Symphony, worked with various commercial artists such as Tony Danza, worked as a session musician at Warner Brothers Studios and EastWest Studios, worked as a sideline musician on various television series such as “Glee” and “Knights of Swing”, and more. He has also had the opportunity to study with musical greats such as Raynor Carroll, Mark Converse, Donald Barrett, John Magnussen, Greggory Goodall, Theresa Dimond, Clayton Cameron, and Jonathan Pinson. Jonathan now resides in East Los Angeles as a freelance drummer, percussionist, audio engineer, and educator looking to inspire the next generation of musicians.