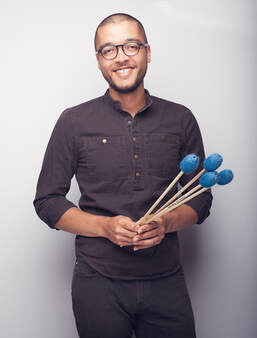 Stephen Hall is a percussionist and marimba specialist based in Southern California. He performs gigs with various groups and events throughout California, develops new repertoire for keyboard percussion, performs solo recitals, and teaches privately and at several schools and organizations. Stephen is also the cofounder of Spectrum Ensemble, a non-profit new music group advocating for increased LGBTQ+ representation in music.


Stephen began his musical studies on the piano at the age of five and took up percussion in middle school. In high school he was lucky to start studying privately with Glen Crosby and Susan Willmering, who prepared him to go on to study at some of the top music institutions in the world. Stephen received his bachelors degree at Northwestern University, studying with world-renowned percussion soloist She-e Wu. He went on to receive his masters degree at the San Francisco Conservatory of Music, studying with Jack van Geem - long-time principal percussionist of the San Francisco Symphony.


During his undergraduate studies, Stephen took place in several competitions. He was named winner of the 2012 Percussive Arts Society International Marimba Competition, and the 2011 Drum Corps International Individual and Ensemble Competition in the solo keyboard percussion category. He was also a finalist in the 2012 Southern California Marimba Competition. Stephen performed as a member of drum corps for four years. In 2008 and 2009, he was a member of Pacific Crest Drum & Bugle Corps. In 2010 he joined the Phantom Regiment, where his section won the coveted Fred Sanford high percussion trophy. In 2011 he joined the Santa Clara Vanguard, where he won the DCI I&E competition. Stephen also taught at the Blue Devils B drum corps in 2016, and currently is on the teaching staff at the Santa Clara Vanguard Cadets.


Stephen has lived, performed, and taught in Chicago, San Francisco (and the wider Bay Area), and Berlin, Germany. Since the beginning of 2019, he lives in Altadena, CA, and is the percussion teacher at South Pointe Middle School and South Pasadena Middle School, teaches percussion and piano privately, and is a front ensemble instructor at the Santa Clara Vanguard Cadets Drum and Bugle Corps.