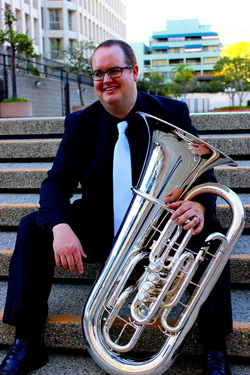 Gabriel Sears          musicman4288@gmail.com                 website:  www.gabrielsears.com
Gabriel Sears has established himself as a leader among the new generation of brass musicians. Heralded by the U.S. Air Force Band as an "amazing talent" (MSG Burts, 2006) after becoming the first brass musician to win the Colonel George S. Howard Young Artist Competition, it was evident early in Gabriel's career he would set the new standard in tuba performance. Continuing his competitive career, Gabriel won 2nd prize at the '08 and '09 Leonard Falcone International Tuba/Euphonium Artist Competition, and received a 2011-2012 Fulbright Grant to study tuba performance at the Hochschule für Musik in Hannover, Germany with Jens Bjørn-Larsen. While studying with Sam Pilafian and Patrick Sheridan at Arizona State University for his undergraduate degree, Gabriel was an active performer in over 15 ensembles throughout the Phoenix valley on both tuba and bass trombone. Most recently, Gabriel was the 1st place winner of the brass division in the Pasadena Showcase House for the Arts 28th Instrumental Competition. Gabriel currently performs at Disneyland's California Adventure Park and throughout the Los Angeles metropolitan area.