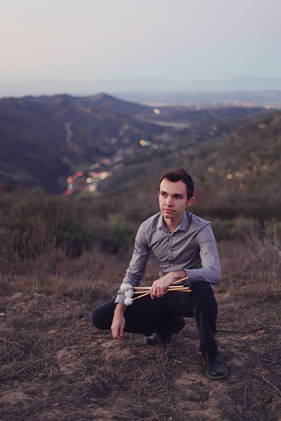 Derek Tywoniuk      derek.tywoniuk@gmail.com
Derek Tywoniuk is a Los Angeles-based percussionist, composer, and educator.  As a performer, he has appeared with the Lucerne Festival Academy Orchestra, Cleveland Orchestra, Colburn Orchestra, and Spoleto Festival USA under conductors such as Pierre Boulez, David Robertson, Matthias Pintscher, and Gustavo Dudamel.  An avid advocate of new music, he is a member of the LA-based new music collective wild Up, as well as the Smoke and Mirrors Percussion Ensemble.  With the latter, he has recorded two albums on the Yarlung Records label.  As a composer, his music has been published by C.F. Peters, recorded on the Bridge and Yarlung Record labels, and performed internationally by soloists such as Nancy Zeltsman, Fumito Nunoya, and Beverley Johnston, as well as groups such as wild Up and Trio Céleste.  Derek holds a Bachelor of Music degree from the Cleveland Institute of Music, where he studied under Paul Yancich and Richard Weiner, and currently studies with Jack van Geem at The Colburn Conservatory of Music in the Master of Music degree program.